The sensor control panel is one of the weakest points of microwave ovens. At one point equipment failures occur. program selection sensor buttons stop responding to pressing or respond half the time. If one or several buttons of the Samsung microwave sticks longer than for 60 s the system will inform you with SE error code on the screen. 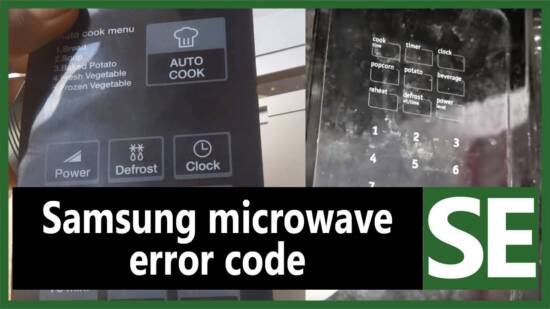 What to do if the buttons of Samsung smh8165st microwave have stuck?

Note! Many users confuse the first code letter “S” with the number “5”. 5E and SE error codes are the same.

If this error code appeared on the microwave screen, it is strongly prohibited to leave the microwave powered and unattended. The system can become self-activated when there is nobody at home and this may cause a fire. If you cannot power it off, always leave the microwave door open. The SE error code of the Samsung microwave cannot be reset by powering off for a while. It will appear again and again and the problem with the control panel membrane will not be fixed.

You can find many fixes for the microwave sensor panel buttons over the Internet. I will tell you about one of them. But before you start repairing such equipment as a microwave yourself please note that it is under deadly high voltages (up to 5000 V even when it is off)(microwave ovens have components which absorb accumulate electricity).

Samsung microwave keypad consists of two films with lines and lands. The failure often occurs due to buttons sunken after pressing the membrane sensor which contacts the other membrane even after the slightest vibration.

Before repairing the sensor panel you need to unstick it from the microwave. After this divide it into layers.  Inspect the films to make sure that their lines are in good condition. If one of them is damaged, this can be the problem. If all lines are integral, then contact closure is the problem. Perform all the following actions as carefully as possible for preventing further damage to your microwave.

If all buttons are working when pressed only (not spontaneously) and SE error code does not appear on the Samsung microwave screen anymore, the sensor recovery operation has been completed successfully and the microwave can be used further.

This way does not guarantee a long service life of the sensor control panel as the film will be pressed further. This will lead to its failure and SE error code will appear again.

In a real sense, it can be said that such manipulations allow fixing the problem for some time (for a week or half a year). If the microwave buttons are very worn-out, it is recommended to replace the sensor.

For buying a new sensor keypad find out the number of your microwave. It is printed on the equipment tally. The sticker can be inside the microwave or on the backside. Be sure not to confuse the model and code of the Samsung microwave.