If you have opened the fridge and discovered that one wall is warm and the other one is covered with ice while Samsung refrigerator error code 22 E appeared on the display, this means that something is wrong with the fan. Before calling a repairman or taking the machine to the service center, try fixing the failure yourself. 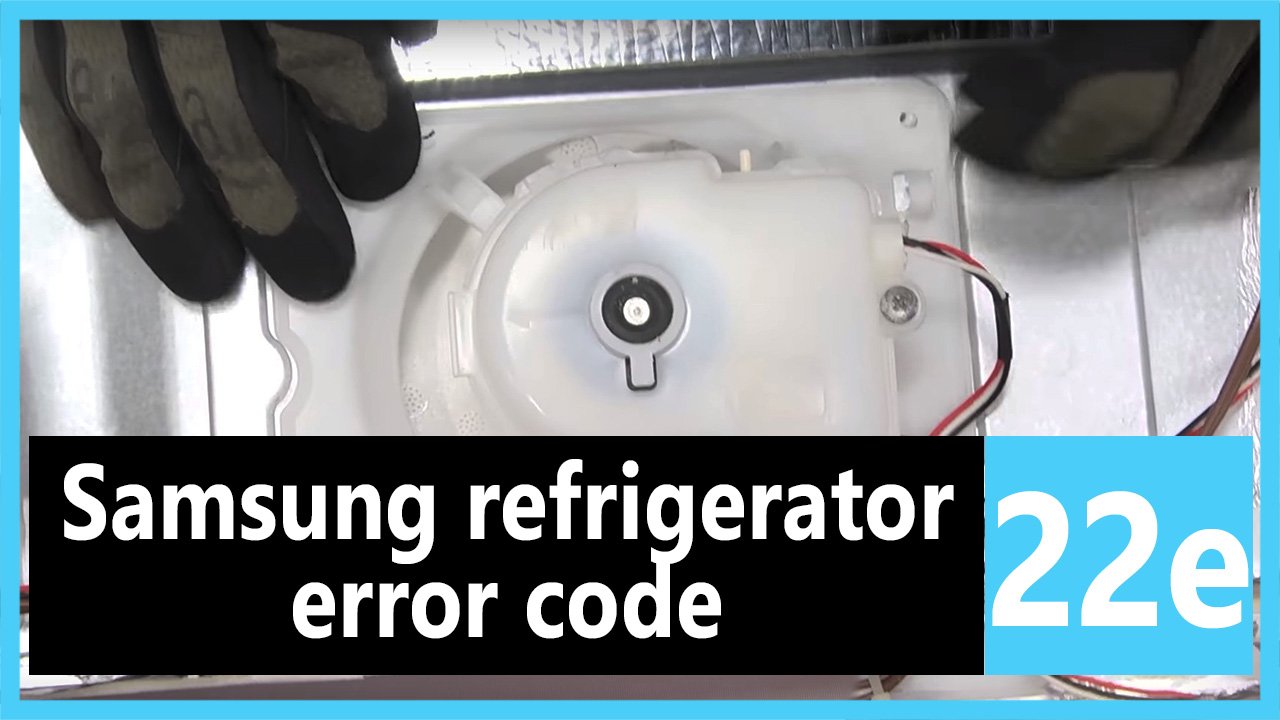 It is a fan error or, to be more exact, an error of the evaporator blower.  It means that the machine is broken or is underperforming. This error appears during the fridge self-diagnostics when switching on or restarting the control unit. If a failure is detected, 22 E error code appears on the display.

In some models 22E fused, while others – separate: the numeration appears on the freezer temperature display and the letter symbols appear instead of the fridge temperature. The machine works unevenly: somewhere there is too much ice and somewhere the fridge is warm, the fan buzzes very loudly or, vice versa, the usual blade noise is absent.

What to do first of all?

Reset the machine. 22 E error will disappear if:

Does the uneven cooling problem persist? Then you can return the cipher designation for making sure that there is a failure of the blower. For this hold, the Power Freeze и Lighting buttons for 8-10 s again.

The module will beep continuously and show the 22E error code for 1 minute and then the freezer and fridge temperatures will be displayed again.

Samsung refrigerator error code 22 E appears in some cases related to the fan work. Firstly provide access to it and the surrounding components. They are located on the back internal wall of the freezer. For accessing them remove the panel. For convenience use a heat gun or a blowdryer. This allows avoiding the failure of the plastic part which is very flexible and would not crack.

This can be caused by two factors:

For putting the cooling system back into operation power off the fridge. Then inspect the fan and clean the proximal area with a flow of hot air. Clean the blades, clean them from deposits and debris. Switch on the machine and let it fully restart for 10 minutes.

Water stagnation in the drainage

22E error also appears when the drainage is clogged: moisture is accumulated and gets absorbed by the fan gradually thus causing blade freezing.  Heavy murmur and idle run buzz are the main signs of the failure (except warm and iced chamber zones). The problem can be solved by defrosting, cleaning the discharge hole and installing the water flow control system on the evaporator.

The vent hole is clogged

This is caused by improper airflow circulation. 22E error code is caused by ice build-up which clogs the vent damper. For fixing this problem:

Also, check the temperature settings. It is possible that the controller was set to the maximum so too much cool air is absorbed and this causes the ice build-up. To solve the problem reduce the freezing temperature.

If the fan does not rotate and 22E error appears on the display, it may be powered off. So inspect the wires for damage and check it with a circuit analyzer. Restore the circuit with a splice or solder if there is a visible discontinuity. If you cannot find the defect and the voltage blinks, replace the bus.

Also check the fridge evaporator wires (brown, orange and grey) connected to the CN74 circuit board. Inspect their connection at the connector and solder them, if required. If the connections are OK, the problem is with the fan motor or IC.

If the wire is OK and the fan is still powered off, Samsung refrigerator error code 22 E appears due to:

For solving the problem replace the damaged part.

Turn the blades: if they are rotating freely and the motor does not work, this means that the 22E error code appears due to this, It could blow due to voltage changes. For fixing this problem replace the motor. This can also be caused by a dried-out lubricant. In such cases lubricate the bearings.

In this case not only 22E error appears, but also 5E error. The first problem is related to the fan and the second one – to the defrost sensor. These parts are directly interrelated and if one breaks, the other one will also fail. The problem should be solved step by step:

For receiving high-precision readings, place the sensor in ice water and let it cool for 20-30 minutes. Then check it with a circuit analyzer. If it is broken, replace it and reset the 22E error code.

Also, there may be some problems with the defrost timer. It should be checked manually. For this mark, the current position with a tip marker or a felt-pen put a screwdriver inside the slot and turn clockwise till it goes click running the defrost mode. If the ice began melting in 20 minutes, this means the machine is OK and this was not the problem.

The thermal controller is another weak point. When it breaks, ice may accumulate in the section thus disturbing the fan work. The temperature regulator resistance and voltage should be checked (110V is the normal value). If the value is higher or lower, the system will not complete the cooling-defrost cycle and Samsung refrigerator error code 22 E appears.