If error codes 88 suddenly appeared both on the right and left screens of Samsung refrigerator, then anything can be expected from it. The device ceases to maintain temperature and works inconsistently, although a check shows that all the components and sensors are normal. 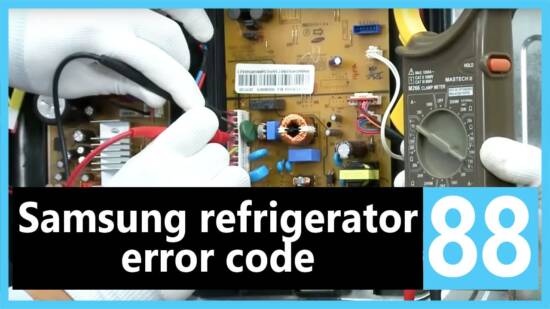 What is error 88 caused by?

It appears after a sharp on-off of power. It is found mainly in inverter refrigerators since they are unstable to voltage variations, unexpected power spikes, intermittent power supply, power outages and short circuits in the network. All this instigates error code 88.

It appears in the form of pairwise displayed digits 88. Moreover, the last eight can blink in the range from 8 to 3, showing 83, 85, 86 or 88. It depends on the type of secondary damage – what exactly was violated in the unit because of the voltage variation. Most often, a PBA inverter converter, a capacitor for starting the compressor, as well as power boards and electronic components in other subunits get out of order on the main module.

What is error 88 associated with?

It concerns the operation of the control board, which, when automatically checked, does not receive signals from the rest of the microcircuits. It indicates the first stage of equipment diagnostics – the fact that the central module is not able to check the system after an emergency power on-off. In other words, the refrigerator always returns to the beginning of the test mode because of the inability to complete it.

How to eliminate the problem at home?

There are three types of solutions to remove error codes 88 in Samsung refrigerator:

In the latter case, it is necessary to press the Energy Saver and Alarm keys (in some models – Lighting). Hold them for 8 – 12 seconds, and then release them, forcing the device to return to normal operation. Such an action will help it to perform the test to the end and eliminate error code 88.

In inverter refrigerators of the earlier models, you should press Power Freeze and Power Cool. Hold the buttons until the display emits a beep and goes out. This will mean that the unit has entered the test mode and started checking, what will take several minutes.

Professional solution to the problem

If, after all the actions are done, error codes 88 in  Samsung refrigerator appears again, then the problem is in the central board. It could be seriously damaged by an unexpected power outage, excessive peak currents, or burned out due to a short circuit in the network.

And since this element controls the functionality of all electronic components and power boards, it must be replaced. Only in this case, error 88 will stop to appear on the screen. To get to the main electronic module (its number is WR55X10942), it is necessary to:

Then you need to dismantle the defective board and install a new one. Its price is $ 140 and above. Assembly is performed in reverse order. If you are not bent on independent actions, contact a service provider.