The Samsung washing machine starts the washing cycle as usual. But when it comes to spinning, it issues the UE error. It means that you have overloaded the drum or, conversely, put a few items. 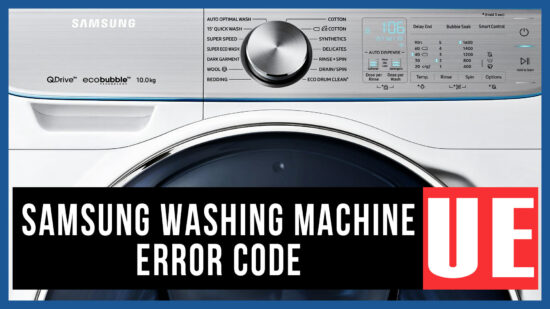 To understand how to eliminate it, you need to know all the reasons for the code appearance.

The code appears on the Samsung washing machines’ display in case of the drum imbalance. The E4 code is similar to it. This one is typical for the washers up to the 2007 year of production.

Usually, the washer displays the error on the third, seventh or ninth minute of the spin. But the washing machine can issue the fault anytime after the spinning process starts.

When the code appears on display, the reason is the following:

How to fix the problem

What to do if the display shows the error? Do the following:

How to eliminate the fault codes if the door is locked?

So, it may be necessary to drain water through a special filter, located at the bottom of the washing machine.

If the above methods don’t help, and after the test run the washer again shows the error, then there is a serious failure. You have to call a specialist who knows how to correct the situation.

When to call a specialist for repair

Resetting the error from the Samsung machine display requires a specialist if:

After finding out the reason for the code appearance, it is easier to remove the fault and fix the work of the device. But for this, it is often necessary to invite a specialist who will eliminate the malfunction.

What does UE mean on my Samsung washer?

A UE error indicates an imbalance. It occurs when the washing machine cannot distribute the laundry along the walls of the drum. Sometimes it is caused by mechanical malfunctions, such as deterioration of carbon brushes, damage to the tachometer, damage to the belt drive, or destruction of the bearing. A failure in the control board is also likely.

What is UE in the washing machine Samsung?

UE on the Samsung washing machine display indicates an imbalance. It is caused by the uneven weight of the laundry or overload/underload of the drum — other provoking factors: failure of the bearing assembly, tacho generator, belt, electric motor brushes. In rare cases, the error is due to damage to the mainboard.

How do I fix the error UE on my Samsung washer?

Redistribute the laundry to get rid of the UE error. If that doesn’t help, check the basic elements of the mechanism. You may need to replace the Hall sensor, worn brushes, or belt. Make sure that the bearing does not break due to leakage of oil seals. Check the control module for damage.