Whirlpool duet front load washer displays error code E1 F9, it sounds, but does not drain water and does not go to spinning. What’s the matter? After all, a front load washing machine usually pumps out all water in 2 minutes. 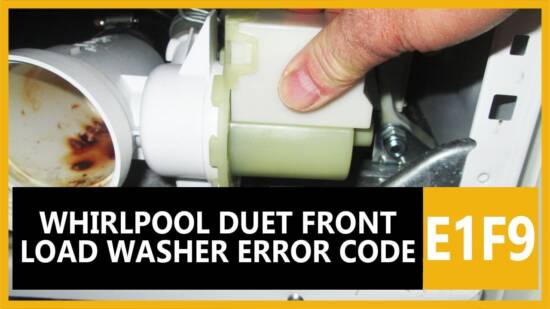 What is the error code E1 F9 related?

The cause must be sought in the drain system. A sign of fault is unsuccessful attempts of the drainage pump to pump out water. If it cannot do this the first time, it restarts in 5 minutes and then switches off. Thus the washer tries to drain the spent liquid from the tank two times for 4 minutes. After 8 minutes of waiting, error E1 F9 appears on the screen which may be associated with:

What should be done first?

First, watch the water. If it flows very slowly, it means the matter is a stuck object. Just check the pan and take out the thing that got there. Didn’t you find anything? Reboot the equipment:

In case of unexpected failures of the control module, different signals appear, including error code E1 F9, so sometimes this measure helps. Is everything still the same? Proceed to a detailed examination.

Main causes and methods for their elimination

If Whirlpool duet front load washer displays error code E1 F9 and blocks the operation of the machine, you need to act on a “simple-to-complex” basis. It will save you from overpaying because some elements are expensive.

It picks up trash and small objects before they reach the pump, instigating error code E1 F9. To access the filter, unscrew and remove the front panel. Then gently turn it and remove it from the groove.

But before starting the repair, be sure to turn off the power of the machine, take a rag or basin with low sides to collect the remainder of the water. When you remove the filter, rinse and brush it, removing clogs. Replace the broken element with a new one. It costs $ 8 –18, assembly – $ 26.

Due to the vibration of the washing machine, the drain hose may move and get stuck between parts, twist, or bend. This is one of the common reasons that error E1 F9 appears on display. Also, it can be clogged with large debris blocking the drain. To solve the problem:

Since it is located at the extreme point of the washing machine, it often accumulates foreign objects that block the exit of water into the sewage. The result is error code E1 F9. Air leaks are also possible.

For cleaning the tube, any tools that match the diameter are suitable. Be sure to take a pan or basin, because there may be water in the tank. To merge it forcibly, you need:

As a result, the liquid will come out by gravity. Then wipe the walls of the pipe by removing dirt, connect the sewer hose, switch on the unit, and check whether error E1 F9 appears or not. If yes, proceed to the next step.

The matter may be in the pump itself or its contacts. Signs of damage are low rattling sound when the drum is rotating, lack of water drainage, and the specific buzz of a working pump. First, look at the connections, because they may also cause error code E1 F9. For this:

Control board has burnt out

Did the previous steps not eliminate the drain problem? Is Whirlpool duet front load washer still displaying error code E1 F9 on the screen? Then replace the microcircuit, which is located under the top panel. It costs $ 100 – 112.